Skip to content
Press Enter / Return to begin your search.

Free will services are big in the UK. For many British charities, the offer to write a will for free and include a charitable gift is an important tool in their legacy fundraising mix. However, in continental Europe, the situation is quite different. In most countries, charitable free will services not exist or are still in their infancy. Dylan Burke from Guardian Angel shares his knowledge and learning in this guest blog.

Why do charities use them?
It’s all about legacy income. The hope is that by offering a free will – something that most people know they should have in place, but might not have got round to doing yet – people are more likely to then use this service (as it’s free) and they might also include a gift in their will to that charity.
For example, if the will costs a charity £100 to write, the supporter might leave 1% of their estate – which in the UK currently equates to £2800.
Legacies in the UK are consistently the highest performing type of income – at approx. 25:1 ROI – so it’s a big priority for many charities. Legacy income, year on year, is also hitting record numbers in Great Britain too – last year, it was c. £4.3bn – and is only forecast to keep going up.
In short, more people are leaving gifts, of high average values, to more charities. So by offering this service for free, the hope is more people will write their will and pledge to leave a legacy too.
However, for some charities – e.g. those that help people with cancer – having a free service to offer can be of huge practical help.
Others see it as simply a nice thing to be able to offer people, especially when money is tight. Whilst supporters might be asset-rich (i.e. own houses, stocks and shares, investments), they might also be cash poor (i.e. not having a huge amount of disposable income). 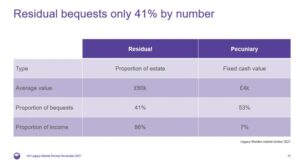 What are the learnings from the last 5 years?
The pandemic has changed so much in such a short period of time. However, in the legacy world, there have been 2 massive changes:

Charities had to adapt as quickly as the rest of the world. Communications switched to digital where possible, and as most solicitors’ offices were closed, thousands of people in the UK looked to online will writing as a solution.
Different countries have different laws on will writing – but here, a will written online is legal and for some people offers a quick, easy, and useful alternative to the more traditional way of doing things.
It’s now a really common way to write your will, with companies such as ourselves (Guardian Angel), Farewill and Make A Will Online to name just a few.
With the boom in more digitally-focused legacy fundraising (email & social media is cheaper than direct mailings) you can reach more people at lower cost and with online will writing services (which are usually cheaper than when written face-to-face), there are now more charities than ever before promoting both legacy campaigns and free will services as a part of them.

Looking back – what works, why?
We’ve been working with nearly 200 charities for a few years now and there have been some key take-aways:

What are the key challenges?
Traditionally, the biggest limiter for charities has been budget. These services can be expensive (anywhere from £50 to £250 per will), especially so if the majority of people using them are writing their will and not leaving gifts to the charity. The other big factor is time – whilst the ROI for legacies is massive, it can take anywhere from 2 years to 25+ to see the income from the gift.
However, with digital communications and many different will writing options (having many companies in this space means that the costs are competitive), it’s within many more charities’ grasp to promote legacy giving and free will services.
Many local / regional charities (e.g. hospices, wildlife trusts, air ambulances) have also worked closely with solicitor firms near to them that are well known. Often, these firms have waived their fees for a week or a month in lieu of a cash donation to the charity. For these firms, it’s a great way to give something back to their local community.
But – do you know what the biggest challenge that we see is? It’s charities not actually promoting legacies. Studies from the US have shown that someone is 17x more likely to consider leaving your charity a gift if they’re asked (DameGreene study, 2003). That’s why being proactive, rather than reactive, is so important. And having a free wills service to offer as a product has become, in the UK at least, an essential part of that promotion.

What can charities in Europe do?
In the UK, charities have plenty of options to choose from when it comes to will writing services – but for readers in other countries, free will service options will differ because of the different legislations around will writing. In some cases, established free will writing services simply do not exist.
However, it all comes down to starting a conversation and having an open mind. Try and explore options with professional firms locally to see what could be possible. By investigating options for facilitating the will writing process, you might find that free and /or online wills could be very appealing options for your supporters.
And don’t forget – the more data & reporting that you can have access to (e.g. total number of wills written, how many included gifts to the charity, average gift size and so on), the stronger your case will be going forward for further investment. 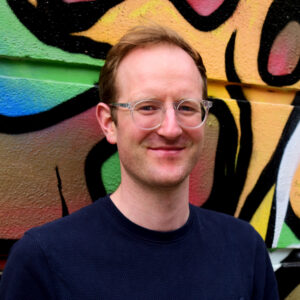 Dylan Burke is head of charity partnerships at Guardian Angel, a free will service in the UK that covers online, telephone and face-to-face will writing services. Burke has been working with the third sector for 3 years, having launched the free wills product in 2019 and in that time has established nearly 200 charity partnerships. You can see more via his LinkedIn for more legacy-focused content.

We gebruiken cookies op onze website om u de meest relevante ervaring te bieden door uw voorkeuren en herhaalbezoeken te onthouden. Door op "Accepteren" te klikken, stemt u in met het gebruik van ALLE cookies.
-
We use cookies on our website to give you the most relevant experience by remembering your preferences and repeat visits. By clicking “Accept”, you consent to the use of ALL the cookies.
Read More
.
Cookie settingsACCEPT
Manage consent

This website uses cookies to improve your experience while you navigate through the website. Out of these, the cookies that are categorized as necessary are stored on your browser as they are essential for the working of basic functionalities of the website. We also use third-party cookies that help us analyze and understand how you use this website. These cookies will be stored in your browser only with your consent. You also have the option to opt-out of these cookies. But opting out of some of these cookies may affect your browsing experience.
Necessary Altijd ingeschakeld
Necessary cookies are absolutely essential for the website to function properly. These cookies ensure basic functionalities and security features of the website, anonymously.
Functional
Functional cookies help to perform certain functionalities like sharing the content of the website on social media platforms, collect feedbacks, and other third-party features.
Performance
Performance cookies are used to understand and analyze the key performance indexes of the website which helps in delivering a better user experience for the visitors.
Analytics
Analytical cookies are used to understand how visitors interact with the website. These cookies help provide information on metrics the number of visitors, bounce rate, traffic source, etc.
Advertisement
Advertisement cookies are used to provide visitors with relevant ads and marketing campaigns. These cookies track visitors across websites and collect information to provide customized ads.
Others
Other uncategorized cookies are those that are being analyzed and have not been classified into a category as yet.
OPSLAAN & ACCEPTEREN
Aangedreven door